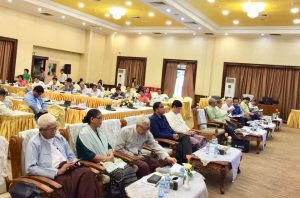 September 8, Friday is the day of MERN’s 8th Annual General Meeting at International Business Center (IBC), Yangon. This is also 8th meeting that MERN has been holding All Member Meeting when it’s age has been 8 years old.

The annual report of 2016 was presented by U Bobby, the secretary of CEC and the questions and answers were followed. After that, the one-month ahead circulated amendment points for MERN Charter were also presented by U Bobby. All members discussed on the points and the Charter was amended.

The last session was election of CEC (2017-2019).  Meeting chairperson introduced proposed new CEC member and new CEC members for 2017-2019 were elected by the MERN members – U Win Myo Thu (Chairman), U Tun Paw Oo (Vice-Chairman), U Tin Aung Moe (Secretary), Dr. Thiri Dawei Aung (Treasurer). Detail list of CEC can be found at the governance section of this website.